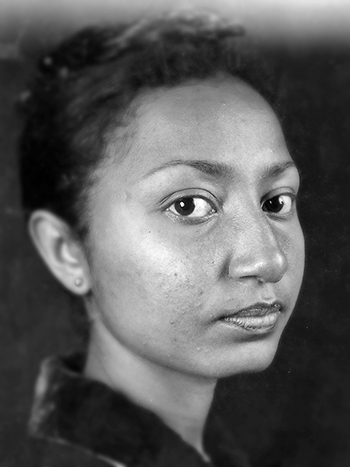 This week I was reached by the news that the jailed journalist Reeyot Alemu has kicked off a hungerstrike in Kality protesting the prison’s decision to deny her visits from friends and relatives. Instead of a release party for the book “438 days” yesterday we took part in a seminar about our Eskinder Nega, Reeyot Alemu and other colleagues that are still in Kality, together with Amnesty International and Reporters Without Borders.

It is just not the right time for champagne, when one of our colleagues is on hunger strike. 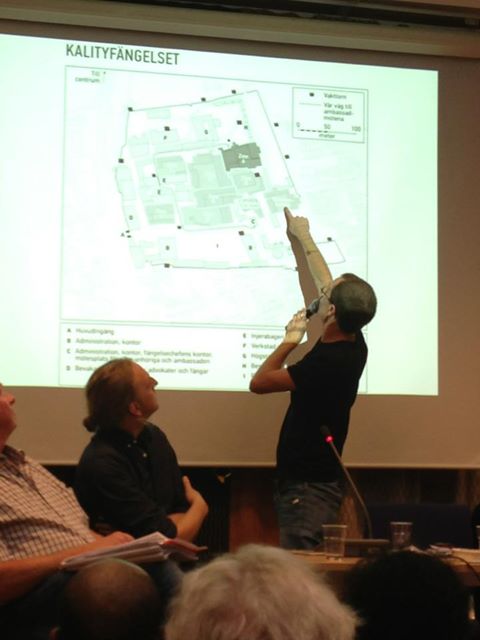 The decision by Reeyot Alemu brings back memories from my encounters with her in Maekalawi and Kality. Yesterday during the seminar we discussed her situation and I can only agree with what Mesfin Negash said at the event: “To say that she is a brave and courageous colleague would be an understatement”.

The first time me and the photographer Johan Persson met the journalist Reeyot Alemu she was handcuffed on a prison bus from the Magistrate’s Court. “What do you do?” I asked. “I am a journalist, we are not alone, we are many political prisoners here accused for terrorism”, she replied and pointed out that the cells to our left, right and opposite to us where full of journalist, teachers and politicians: “If you are released, tell the world I am not a terrorist but a journalist working for the truth.”

Amnesty International later described these months as “the most far-reaching crackdown on freedom of expression seen in many years in Ethiopia.”

Despite being separated from each other in different cells she helped us through the long days of confinement and uncertainty. Even locked up in a dark room without shoelaces, deprived of your freedom of expression as well as your physical freedom, together with the other inmates we keep the most valuable thing that nobody can take from us: the right to determine who you are. Every morning we woke up and said to each other: “We are journalists, not terrorists … this is just another day at the office”.

And whenever I saw her pass our cell I shouted.

“The world is watching!”

She was well aware of the risk she was taking. Her real crime was courage.

“I was preparing articles that oppose injustice. When I did it, I knew that I would pay the price for my courage and I was ready to accept that price.”

On June 21, more than two years ago. Ethiopian journalist Reeyot Alemu was arrested and taken to Makalawi for shining a rare light on her country’s government. What I remember most from Makalawi is the sounds.

The first screams were always the worst.

The frightened sound before the first stroke was loader and more chilling than the crying and sobbing that followed. The fear of pain was worse than the actual pain among the inmates at Makalawi, the Ethiopian central police investigation headquarters in Addis Ababa.

Towards the end the abused prisoner was always silent.

Six disease-ridden cells around a small yard with inmates coughing blood, overridden with lice, fleas and rats called ”Sheraton” by the inmates because even if it was bad, the small dark cells where humans are kept like animals standing chained in the dark until they confess their made up crimes and sign a piece of paper, were worse.

The inmates named these cells “Hilton”.

Humour is the last line of defence.

But the worst thing with Makalawi during this rainy summer month of July 2011 was not the methods used there or the standard of solitary confinement – but rather who the Ethiopian Government hade chosen to put there.

Although Alemu has won the IWMF Courage in Journalism Award and UNESCO World Press Freedom Prize, the Ethiopian government still insists that she is a terrorist. Alemu was offered clemency if she agreed to testify against journalist colleagues.

She refused and was sent to solitary confinement for 13 days as punishment for her failure to cooperate.

The second time I saw Reeyot Alemu was on that same bus on our way to the Federal High Court in September 2011. It was a rainy afternoon. The road was muddy. The city grey. The cranes had frozen in mid- movement and were leaning against unfinished houses with exposed steel girders. On the horizon, the new Africa Hall – a 200 million dollar gift from China – towering toward the sky. A symbol for Addis Abeba as the capital of Africa.

The plan seems to be working.

Most stories from fellow correspondents from here are not about imprisoned colleagues or human rights abuse. They are about growth: Double digit growth.

The local journalists who could have given another picture sit behind me on the bus.

During the bus ride to the court it is as if the country’s proud history holds its breath. The fear for an Arabic spring is so strong that the rulers rather act than being acted upon. For the first time since we where shoot and mock-executed by the Ethiopian military in the desert I am scared. Not for Ethiopia or the prosecution – but for the world we live in and the time we call ours.

What if nobody cares?

Then I see Reejot coming out of the Federal High Court building carrying copies of her articles in her fragile arms.

Articles written and published by her in her legitimate profession as a journalist, is suddenly evidence in support of terrorist allegations.

Then it’s our turn.

We are led into the courtroom and presented to a judge sitting under three portraits of Meles Zenawi and a picture of the Millennium dam project. We are being accused of moral support of terrorism for covering both sides of a conflict. The charges brought out this against us and our colleagues this day basically criminalized journalism in Ethiopia.

“ You will be a famous man I tell the judge, a lot of journalists will come to Addis to cover our trial, you just created a media circus”.

The judge leans back behind his big desk and smiles confidently.

We have been accused of the same things as Reeyot. We have been to the same courts and had the same sentences – but that is where the parallel ends: Eskinder Nega, Woubshet Taye and Reeyot Alemu, among others, are still there.

Me and Johan are free.

They stayed and continued to write.

That decision brought them to Kality.

For their courage, working methods and articles they have been forced to pay with their freedom. With all the detained journalists left in Kality, Ethiopia today is one of the leading countries in the world when it comes to imprisoning members of the press. Repression of the media has also made the country a world leader when it comes to running journalists out of the country.

For a nation, which had courageously liberated itself from the yoke of terrifying dictatorship, this is a sad legacy.

The last time I saw Alemu was in August 2012, not long before Johan Persson and me were released. We passed each other outside the prison administration offices, being escorted to and from our zone. She had recently undergone surgery at a nearby hospital to remove a tumour from her breast, after which she was returned to jail with no time to recover.

She smiled and looked confident.

Reeyot Alemu has now been imprisoned in Ethiopia for more than two years, branded as a terrorist. She is one of many journalists who have been arrested, interrogated and threatened in her country. What makes Alemu exceptional are her refusal to self-censor in a place where that practice is standard, and her unwillingness to apologize for truth-telling.

Since our release I have often been asked if the attention helps the imprisoned or not.

My answer is that it is far more important than food and water.

When you’re locked up as a prisoner of conscience, the greatest fear is to be forgotten. The support from the outside is what keeps you going and international coverage does provide a certain level of protection. Prison guards and administrators will think twice because they know the world is watching.

But we should also be aware of that the arrest of me and Johan Persson made evident the damage to its reputation the Ethiopian government was willing to accept in its effort to silence independent reporters.

As long as Ethiopia can jail journalists and get away with it, it is a cheap and easy way of censorship. To jail a journalist should be regarded as a crime against humanity. It should be like frying a panda bear.

But in this regard I don’t put my hopes to international pressure. For now the jailed journalists are nothing more than “an irritant” in the diplomatic world.

I put my hope in the young generation which I shared the concrete floor with in Kality. Despite the daily propaganda on the Ethiopian state television, ETV, very few in Kality regards the jailed journalists as terrorists.

Some month ago thousands of young men and women marched in the streets of Addis Ababa demanding the release of political prisoners, religious freedom, respect for human rights and the Constitution in a peaceful demonstration.

I have an unquestioning faith in Ethiopia’s young people.

And when I look back and think of Reeyot Alemu and the colleagues who are left behind in the chaos, left on the concrete floor, between walls of corrugated steel I feel sick to the stomach.

But then I remember her smile and strength and think that it’s not us that are fighting for her freedom, but rather Reeyot Alemu with her hungerstrike, that is fighting for ours.

Swedish journalist who together with the photographer Johan Persson was sentenced to 11 years for covering the conflict in the closed Ogaden region by entering Ethiopia country illegally and pardoned after 14 months. Yesterday our book about the 438 days as prisoners in Ethiopia was released in Swedish.

“It is a good news that #ReeyotAlemu, #Emawayish and #Fetiya lifted up their hunger strike today. Visitors are not still allowed to Reeyot other than parents and Fetiya other than her family members.”

The Kality Foundation. A fund that will provide financial support for reporters and photographers worldwide who are imprisoned, persecuted, forced into exile or otherwise victimized because of their profession. From our own experience we know how important it is with food and medicines when you are  locked up as a journalist.